PressCane Limited is an ethanol distillery company which is a subsidiary of the conglomerate Press Corporation Limited and began its operations in June 2004. The plant is located in Chikhwawa on the west bank of the Shire River about 30 km north of Nchalo (55km south of Blantyre) and employs 118 Malawians including management.

The main products of the distillery are fuel ethanol also known as anhydrous alcohol (AA 99.5% v/v) and industrial alcohol (rectified spirit 95.0 - 97.0% v/v). Sugar cane molasses are procured from Illovo in Nchalo and fermented into ethanol. The molasses is a byproduct (effluent) for the Illovo Sugar Mill process whose environmental disposal issues have been solved by the establishment of PressCane Limited.

The high quality of the ethanol is enhanced by the new molecular sieve dehydration (MSDH) technology installed in the distillery.

The fuel ethanol is blended with petrol in the ratio 20% ethanol to 80% petrol by the petroleum companies such as Puma Energy Malawi Limited, Petroda, Engen, Energem Petroleum Limited and Total Malawi Limited. Fuel blending in Malawi (and indeed elsewhere) was precipitated by the fuel energy crisis in the early 1970s. Today fuel blending is mostly driven by: Environmental clean air issues and the recognized rapid depletion of the traditional fossil fuels and thence the necessity of renewable energy sources. There are further considerations which apply to Malawi such as the need to save on foreign exchange. The surplus ethanol after national blending requirements have been met is exported generating foreign exchange for Malawi. 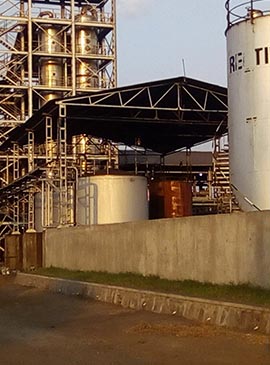